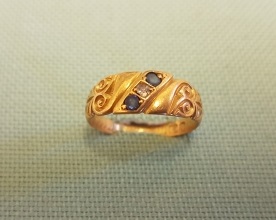 This ring was donated to the Charles Dickens’ Birthplace Museum in 1956. It’s made of gold, inset with three stones and features a scroll detail with the words ‘from Little Dorrit 1913′ written inside. Little Dorrit was Charles Dickens’ eleventh novel, which was inspired by a childhood friend named Mary Ann Cooper (née Mitton). This ring had indeed once belonged to Mrs Cooper.

As children, Mary and her brother knew the Dickens family well; Charles would often go and play with them at their family house in Hatton, London. This was an idyllic time in Dickens’ childhood, before he was sent to a workhouse in 1823 at the age of 11. The experience of the workhouse stayed with Dickens throughout his life, and was used later as a backdrop to illustrate ‘Little Dorrit’ when it was first published in 1855. In the novel, Amy Dorrit (known as ‘Little Dorrit’) is born and raised in Marshalsea Prison. She grows up as a compassionate girl who cares for others, and resourceful enough to earn enough money to eat and live with her father in prison. She truly represents a domestic heroine.

It is well documented that Mary Ann Cooper was the direct inspiration for the character of Little Dorrit. When she was interviewed in her 90s to talk about Charles Dickens, she recalled many happy childhood memories with her brother and Charles going fishing, rabbit-hunting and building dens near her childhood family home. She lived until she was 100 years old, and when she died on 18 May 1913, a limited edition print run of Little Dorrit was published in her memory.

Our collection has several images of Little Dorrit as depicted in Charles Dickens novel, alongside a photograph of the real ‘Little Dorrit’ – Mary Ann Cooper. 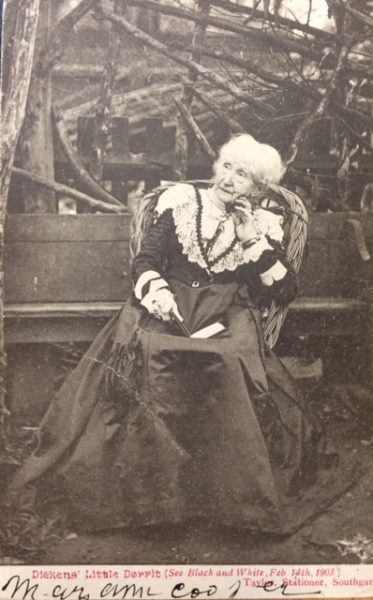 Little Dorrit’s ring is on permanent display at the Charles Dickens’ Birthplace Museum.